For the first time in 12 weeks, COVID-19 testing positivity rates declined this week in Suffolk County.

The testing positivity rate has been below 10% since Jan. 8 in Suffolk. “After months of drastic increase, it seems we are finally moving in a positive direction,” Suffolk County Executive Steve Bellone said.

Officials are hopeful that the holiday season spike is beginning to flatten.

The county is focused on ”getting the vaccine in as many arms as possible, as fast as possible,” Bellone said.

“Suffolk County is poised and ready to go. We have an actionable plan and the infrastructure in place to vaccinate at least 6,500 individuals a day – we just simply need the vaccines,” he said.

This week, the pool of eligible recipients was significantly expanded by the CDC to include first responders, education workers, public-facing grocery workers and people over 65 — meaning more than 7 million New Yorkers are eligible to be vaccinated.

But the state’s allocation of vaccine dosages has not increased. Although Health and Human Services Agency Alex Azar announced this week the agency would release the federal stockpile of vaccines, it turned out there is no federal vaccine stockpile for new doses. The federal agency began shipping out its stockpiled doses in December, an agency spokesperson acknowledged.

Supplies of the two approved vaccines are expected to remain scarce for several months, officials said.

President-elect Joe Biden said he would invoke the Defense Production Act, if needed, to increase vaccine supply. But Biden said “things will get worse before they get better.”

Gov. Andrew Cuomo said appointments — made based on expected available vaccine dosages — rapidly booked up and people should now expect to have to wait about 14 weeks to get their shot.

Cuomo and Bellone both urged residents to be patient.

There were 12,173 new COVID-19 cases reported in Suffolk County this week (Jan. 9-15). County health officials reported 682 new COVID-19 hospital admissions and 638 hospital discharges. There were an average of 823 people hospitalized for COVID-19 this week. There were 113 new deaths, bringing the county’s total fatalities in the pandemic to 2,604 people.

While the testing positivity rate declined in Suffolk, hospitalizations and deaths — which lag behind infections — continued to rise countywide.

In Riverhead, there were 186 new confirmed cases of the virus this week, down from 257 new cases the week before.

Riverhead Central School District reported 31 new cases this week among students and staff. New cases were reported in each of the district’s school buildings and in the transportation department. 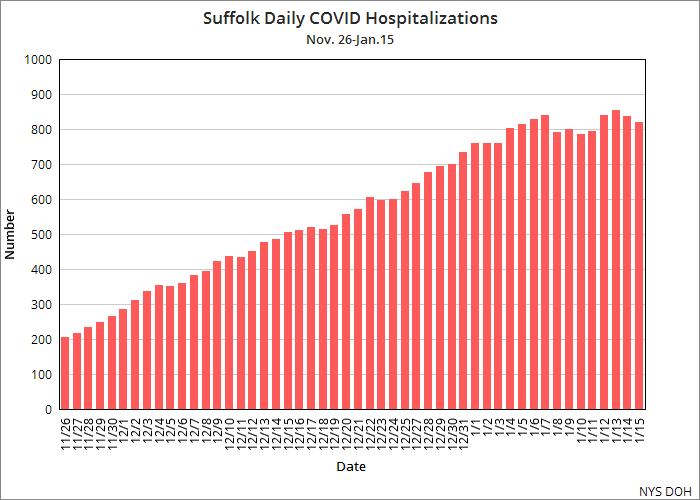 Public health officials are watching the spread of the U.K. variant of the coronavirus, which they say is believed to be 50% more contagious. The New York State Health Department has so far confirmed 17 cases with the new strain, including two in Nassau County.

The CDC said this week the U.K. variant can be expected to become the predominant strain of the virus in the U.S. sometime in March.

Health officials say there is no evidence so far that the U.K. variant causes more serious illness and they believe the two approved vaccines will be effective against the new strain.

“We aren’t out of the woods yet,” Cuomo said this week. He described the situation as a “footrace” between getting the population vaccinated and the spread of new COVID cases, amplified by the new strain of the virus now circulating in the U.S.

NY outbreak is one of the most severe in US

New York currently has one of the most severe outbreaks in the country.

According to CDC data, the virus has killed .12% of the U.S. population since the outbreak began. The death toll in the U.S. is projected to exceed 566,000 by May 1, according to modeling by the Institute for Health Metrics and Evaluation at the University of Washington. The 1918 influenza pandemic killed roughly 675,000 Americans.

COVID-19 has so far claimed more than 2 million lives worldwide, according to the World Health Organization. Nearly another 1 million people are project to die of the disease worldwide by May 1, IHME projects.

Correction: This article has been amended to correct an error in reporting the percentage of the U.S. population killed by the coronavirus. It is .12% not 1.2% as originally stated.