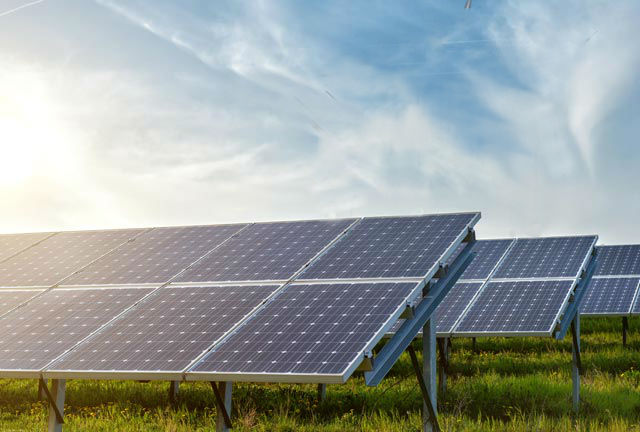 There wasn’t much public in the town board’s public hearing Tuesday on the special permit application of L.I. Solar Generation, the company seeking to build a 22.9 MW commercial solar energy faculty on 198 industrially zoned acres on the west side of Edwards Avenue in Calverton.

Most of the comments, questions and discussion that took place during the hearing, which lasted more than an hour and forty minutes, was among town board members, town staff and representatives of the applicant.

It wasn’t until almost one hour after Supervisor Yvette Aguiar opened the hearing that the first of four members of the public were given an opportunity to address the board via the Zoom video conferencing system. A fifth person attempted to comment but had wifi connectivity issues that prevented it. Each asked questions more than they offered testimony on the matter before the board and their questions were fielded by representatives of Nextera, who also joined the meeting via Zoom.

Mike Foley of Reeves Park asked whether the solar panels to be used on the site contain cadmium, which Nextera’s Mike Dowling said they will not.

Foley also asked who would be responsible for decommissioning the facility and removing the panels and how the performance of those tasks, coming some 30 years in the future, will be secured. Dowling said L.I. Solar Generation, a joint venture of Nextera Energy Resources and National Grid, will be responsible for decommissioning the facility pursuant to a plan the company has already filed.

To guarantee the performance of the decommissioning plan, the company will post a surety bond, in an amount that covers the decommissioning costs, Dowling said. He added that L.I. Solar Generation/Nextera “plan(s) to be around as the owner operator for 30 years.”

Craig Dahlgren of Calverton, who lives on River Road and whose property adjoins the Nextera site, expressed concerns about screening the site with plantings and about potential noise impacts from equipment at the solar facility.

“I see a decrease in my property value — a house that had farm views – now it’s solar panels,” Dahlgren said. “Is there any benefit to me that they can provide so that I don’t hear it, I don’t see it?”

Nextera representatives said they have “provided a pretty substantial vegetative screening,” supplemented after receiving feedback from town officials on their original plan. The plantings will provide an “effective buffer,” they said.

The facility will not operate at night and noise will be “minimal at best” and not in excess of the town’s noise ordinance limitations.

“I want to know whether or not this resident is going to hear that from his house 24 hours a day,” Councilwoman Jodi Giglio asked. Nextera representatives assured her he will not.

Toqui Terchun, president of the Greater Calverton Civic Association, asked if Nextera would consider building a bike path around the property.

Giglio said she had asked Nextera about that. “I think it’s something the board should talk about and consider,” she said. The town would need to work out issues around responsibility for maintenance and liability, Giglio said.

Nextera representatives said that question needs to be asked of the L.I. Power Authority.

Town attorney Bob Kozakiewicz told Hubbard the terms of the agreement are still being negotiated. Hubbard said he is “a little disappointed” that a community benefit payment has not yet been determined.

“My only suggestion is for a public hearing, I think we should have had some idea of what a community benefit is for this as part of the process,” Hubbard said. “So I look forward to hearing what that’s going to be — hopefully, before the written comment section is closed.”

Hubbard also asked about the status of a proposed moratorium on new commercial solar facilities. The town board on Sept. 1 held a public hearing on a measure that would impose a 12-month moratorium on new commercial solar applications, but two weeks later, on Sept. 15, tabled a resolution approving the moratorium. Board members agreed to table the matter for 60 days, to provide the board further opportunity to discuss the moratorium. But the subject has not yet been added to a town board work session agenda.

“It will be coming back in November,” Aguiar answered.

LI Solar Generation’s proposed project would be the fifth commercial solar generating facility in the hamlet of Calverton. It is one of two that have not yet received approvals. The other pending project, Riverhead Solar 2, a 36 MW project on a 290-acre site east of Edwards Avenue, is out of the town’s hands. Due to its size, the N.Y. State Department of Public Service has jurisdiction over it. Together, the five existing and proposed commercial solar facilities in Calverton will generate 88.2 MW of electricity.

The proposed moratorium, brought forward by board members worried about the concentration of commercial solar farms in the Calverton hamlet, specifically exempted currently pending solar project applications and would only apply to applications received after Jan. 1, 2021.

Despite that exemption, which is clearly recited in the text of the local law imposing the moratorium, Aguiar went on at length Tuesday about the need to exempt projects “in the pipeline.”

Giglio said the town should create a stakeholders committee to discuss the moratorium before adopting it.

“That’s the purpose of the moratorium, so we can pump the brakes,” Hubbard replied.

“And we can sit down and talk and figure this out. You form that committee after you put a moratorium up,” he said. “Otherwise, you’re going to have more solar coming in in the meantime.”

Councilwoman Catherine Kent agreed that the board should discuss the proposed moratorium at a work session before bringing it to a vote.

Kent also reiterated concerns she previously expressed about the concentration of commercial solar facilities in Calverton, in and around the Edwards Avenue corridor south of Middle Country Road. They are being developed there because of an existing LIPA substation on the east side of Edwards Avenue.

Kent asked that the State DEC’s comments made in connection with the facility’s Wild, Scenic and Recreational Rivers Act Permit be posted on the town website, so the public has an opportunity to review them and comment on them before the special permit hearing record is closed. She asked that the record be kept open for more than the standard 10 days, but when the supervisor closed the meeting she left the hearing record open for 10 days for written comment.

The town board decided in February that the L.I. Solar application required no additional environmental review, and in a 3-2 vote, with Aguiar and Kent opposed, issued a negative declaration — dispensing with the requirement of an environmental impact statement.